Today’s post is featuring a favorite of almost a decade.  My then boyfriend, now husband, Johann, and I found a gem in the small village of Fairport, called Royal Cafe. A sign for gelato is what initially caught my eye.  A friend of mine had just returned from living in Italy for two years, and raved about the gelato she had there.

When we walked through the doors, we were greeted by the friendly owner, Sadik. He was excited to hear it was our first gelato experience, and went into detail about how it was different than regular ice cream, and his process for making it in-house. If you’re not familiar, gelato is made from whole milk instead of milk and cream. This cuts down on calories and fat content.  The owner focuses on the use of fresh, organic ingredients, and extracting as much natural flavor as possible, in lieu of loading his gelato with sugar.  He was happy to let us sample new flavors from the case before deciding. From our first taste, we were hooked.

Fast forward to today where Stef and I are sitting in Royal Cafe. Upon walking in, you’re welcomed by a colorful display of sixteen different delicious gelato flavors.

Kate explained today’s flavors and made suggestions for combinations since we were having trouble deciding on our own!  We each decided to go with a small cup, which has three scoops. The medium has four, and the large, five. We decided to divide and conquer and each get three different flavors. Stef went with menta (mint), peanut butter chocolate, and espresso.  I decided to go with the salted caramel, coconut, and Sadik’s favorite, hazelnut. Kate had explained to us that Sadik takes the time to oven-roast the hazelnuts, which fills the whole cafe with their aroma. 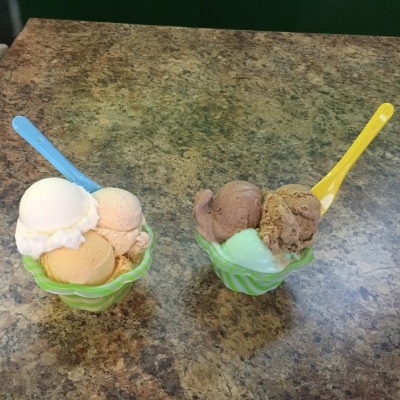 Even if you cannot have dairy, there is still an offering of various dairy free sorbets.  Some of the dairy free sorbet flavors include lemon, blueberry, mixed berry, and blackberry, which Stef did sample!  The blackberry flavor really came out in every delicious bite.  Yum!

Being a cafe, they do have more than just scrumptious gelato.  You can treat yourself to lunch, or a pastry dessert and a smoothie or coffee.

Staying true to in-house made goods, Sadik’s mother makes the ciabatta bread for the sandwiches, and insists on using organic ingredients for the menu items.  In addition to sandwiches they offer a variety of wraps and salads. 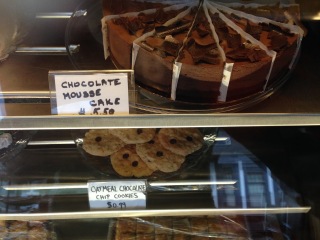 If you’re looking for a real treat that is hard to find anywhere else, try the spaghetti sundae! It’s made with vanilla gelato, snaked like spaghetti, covered in a strawberry sauce, topped with white chocolate and brownies, then drizzled with a chocolate sauce.

If you are getting a gelato craving, but the Fairport location isn’t a close drive for you, they just opened a store front location in the food court near the carousel at Eastview mall. They also supply their gelato to a few different restaurants around the Rochester area. No matter what you do, just make sure you check out one of the Royal Cafe locations. We’re already scheming our next flavor combinations. You’re in for a treat!